The Burden of Recidivism

“Education gives us direction and often provides people with the tools they need to leave the path that originally led them to incarceration.  Educational programs are proven to reduce recidivism, and it is imperative that every incarcerated individual is provided with the opportunity to better themselves and leave prison ready to fully contribute to their communities”

By definition, recidivism is a person’s tendency to relapse into a previous condition or mode of behavior, especially a relapse into criminal behavior [1]. Elijah Cummings served as a civil rights icon in the U.S. House of Representatives from 1996 until his death in 2019. He saw education as a means to assist incarcerated populations integrate back into society, to reduce the long-term costs of prisons, and to help citizens contribute back to their communities. He understood the crisis arising from applying harsher punishment as a means of deterrence within the American criminal justice system. Historically, this harsh punishment is the way crime was addressed; however, decades of research is helping to provide evidence against this and paint a different picture.

The high cost of correctional spending is exacerbated by an astonishingly high national recidivism rate of 68% within 3 years, 79% within 6 years, and 83% within 9 years. [2]

Recidivism causes both a physical and financial burden to prisons. A physical burden by increasing the prison population and; by doing so, increasing the financial strain. In 2017, it cost over $36,000 per year to house each inmate [3].

While some may argue that privileges like commissary and television can be reduced, we believe harsher conditions may actually increase the likelihood of recidivism. Harsher conditions can include, but are not limited to, overcrowding, reduced socialization, and abuse. However, there is currently a gap in research available in determining which specific aspects of incarceration increase or decrease recidivism. [4]

While one may easily get lost in the numbers, it is also important to consider that the incarcerated population is more than just a statistic. We value education as a rehabilitative approach that humanizes prisoners and enables them enter the workforce upon release.

A lack of marketable skills increases the challenge faced by individuals upon release from prison. We believe that investing in education and practical skills will reduce recidivism by facilitating entry into the workforce and a more stable place in society.

Education as a Means of Reducing Recidivism

Inmates who participated in educational programs had 43% lower odds of recidivating than inmates who did not. [5]

Education provides a long-term cost efficiency within prisons by cutting costs that are incurred by recidivism. Studies conducted over the last two decades almost unanimously indicate that education reduces recidivism. [6] [7] [8] [9]

Education vs Prison Cost by State 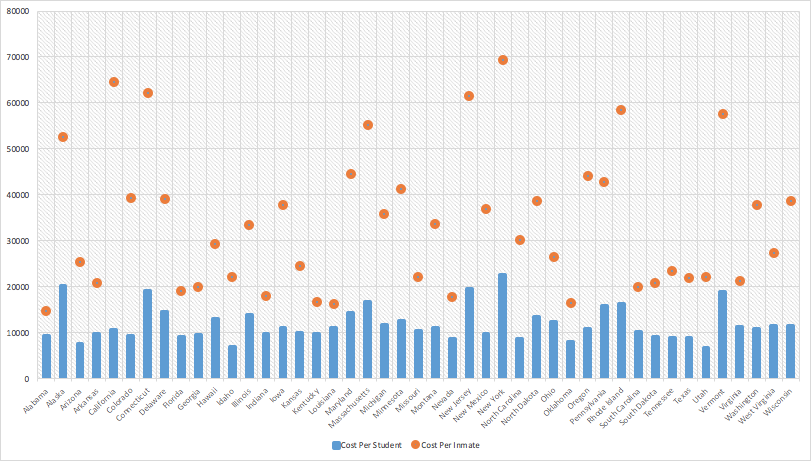 Education data was collected by the U.S. Census for 2015 educational spending for public secondary education by state. Prison data to provide the state prison expenditure metrics by state was obtained from the Vera Institute through the department of corrections survey conducted in 2015. [10] [11]

When comparing the cost per public post-secondary student to the cost per inmate, we see that the cost of education is consistently less than the cost of incarceration.The average per inmate cost was $33,849 in Fiscal Year 2015 while the average student only cost $11,886 during the same year. This translates to an inmate costing over 2.8 times the cost of a student, on average.

Reducing recidivism translates to a reduction in crime, savings to taxpayers, and overall contributions to communities by increasing safety and well-being where formerly incarcerated people return. Not investing in education, while financially prudent in the short-term, could ultimately negate savings as high recidivism rates continue to maintain a high incarcerated population.

The only realistic expectation one can have by releasing prisoners with the same skills they came in with is that they are eventually going to get involved in the same activities that resulted in their incarceration. Education enables individuals to leverage a wider variety of skills in economic, personal, and social arenas. It can present a means of rehabilitating and redirecting one’s focus away from crime.

Consider the effects education can have in terms of reducing recidivism and bettering the lives of many individuals who may have made a mistake, and may deserve a second chance. We at Project Reclass will continue examining the potential impact of education on incarcerated populations and recidivism in general.

[7] Correctional Association of New York, “Education from the Inside Out: The Multiple Benefits of College Programs in Prison,” 2009.

Grato Paneque With a BS in Criminal Justice and MS in Administration of Justice, Grato advocates for the transition towards more educated individuals within the bottom line of the CJ system; ranging from law enforcement, to the Department of Corrections.

Jacqueline Paneque is currently a Pricing Analyst for TE Connectivity. She also has experience in Finance, Operations and Project Management in conjunction with an educational background in statistics, management, finance, and economics. As a life learner, she is passionate about using her broad knowledge to help both individuals and businesses reach success.